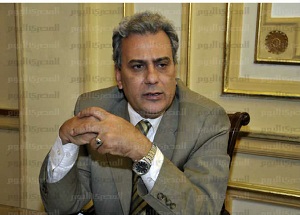 Professor Gaber Nassar, President of Cairo University, has reviewed an important report on the performance of National Cancer Institute, Cairo University, in 2014 year. The report includes numbers and statistics concerning the patients frequented outpatient clinics of the institute and the institute’s branch at Al Tagamoa El Awal, as well as the surgical operations conducted for patients at National Cancer Institute during 2014, and the numbers of the patients of interior sections during the last three months of the same year.

The report has shown that the total number of the surgical oncology operations conducted at the institute during 2014 year have reached 3427 varied surgical operations with an average of 285 surgeries per month. The report of the performance of National Cancer Institute, Cairo University, has illustrated that the number of the patients of interior sections of the institute’s hospital during the last three months of 2014 year has reached 3310 patients in surgical, pediatric, and internal medicine sections.

Nassar has confirmed that the National Cancer Institute seeks achieving leadership at the regional level concerning entrapping cancer in fields of therapy, research, training and education according to the latest scientific findings in this field. He pointed out that the institute offers complete free therapy for about 85% of the patients and treats about 15% with affordable prices most of which stem from health insurance or treatment decisions at the state’s expense barely cover the treatment’s cost. Nassar has said that National Cancer Institute depends in the services it offers to oncology patients in Egypt on the state budget and donations as well as international cooperation.

Haddad has said that the institute’s professors conduct advanced researches related to cancer prevention in cooperation with similar research and oncology centers in the world, pointing out that the institute receives new cases annually. He added that there is still hope in establishing the New National Cancer Institute to which the university allocated 34 acres of its land at Sheikh Zayed City for meeting the institute’s needs and completing many therapeutic and research services, as the planned project is a an integrated city for oncology research and treatment. Cairo University has contracted with one of the global companies for managing the project. The designs are finished and the project is scheduled to be implemented in three phases through donations and international cooperation.