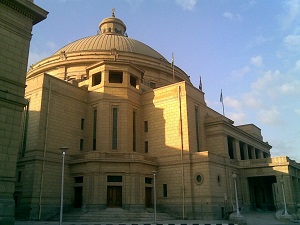 Prof. Dr.\ Gaber Nassar, Cairo University President, has declared that the Prime Minister, Ibrahim Mehleb, has ordered forming a committee composed of Cairo University, ministries of finance, planning and health, and The Central System of Organization and Management for considering the needs of Endemic Disease Hospital at Al-Haram St. It is established on an area of 4.6 acres as a charitable waqf until the first phase is inaugurated by the end of this year 2015. It is considered the first specialized hospital in endemic diseases in Egypt and the Middle East.

Nassar confirmed the state's concern in the university hospitals system, especially Kasr Al Ainy Hospital and enhancing its capabilities for offering better therapeutic services for citizens, pointing out that the final touches of inaugurating the second phase of The New Emergency Hospital in Kasr Al Ainy 185 on March 21, 2015, were followed-up during the meeting held at the headquarter of Prime Ministry on Sunday, February 22, 2015, headed by Eng.\ Ibrahim Mehleb, The Prime Minister, and attended by the Minister of Health, the Minister of Higher Education, and representatives of stakeholders. The second phase inauguration also includes the remaining part of The Central Care, besides,100 beds at the internal departments and covering the needs of the hospital in the nursing sector, and completing the equipment of the remaining floors of the hospital, counting three floors of  New Kasr Ainy "185 Emergency & Burn Hospital" after inaugurating three floors at the hospital in July 2014.

Nassar has said that the meeting has tackled a number of topics concerning university hospitals, most important of which are raising the efficiency of Kasr Al Ainy Hospital and the modality of benefitting from its optional in serving the patients who frequent the hospital. During the meeting, The Prime Minister has also referred to enhancing the work environment in Kasr Al Ainy Hospital and developing some of its performances.