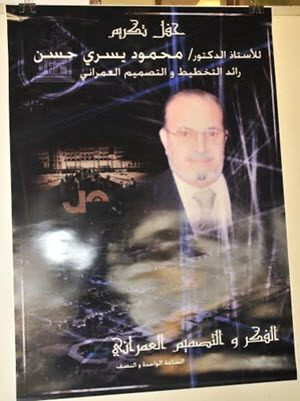 Noteworthy, Professor Mahmoud Youssry has received his PhD. in cities and regions planning – MIT USA – in 1965. He represented Egypt and North of Africa in a number of international bodies, such as; UN UNIVERSITY, the international research team on global cities and future urbanization – Tokyo 1995, The European Union for planning schools – AESOP Reggio Calabria – Italy – 1990, etc.

Professor Youssry received many medals and certificates of recognitions, such as; International Union of Architects Award (Cities Planning Award) in 2008, Medal of Science and Arts of the first Class year 1983, The pioneering engineering honoring certificate - Syndicate of Engineers years in 1989, 1992, he received a certificate of recognition from Federation of Egyptian Architects in 1990, Environmental and Applied Sciences Award of Merit, Cairo University, in 1999.