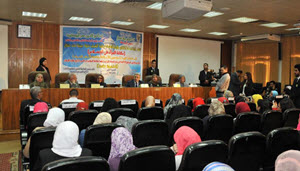 On Monday, March 16, 2015, Cairo University has held an activity on resisting harassment and violence against women, under the “Secure University for All” slogan, inside the university’s faculties and institutes.

Nassar has inspected many faculties inside and outside the university’s campus and took souvenir photos with students. He mentioned in his speech at Faculty of Mass Communication that woman is the whole society since she brings up children and her work is multi-faceted compared to man. Prophet Muhammad (peace be upon him) urges the confrontation of reprehensible acts, such as; harassment. Nassar has asserted that the university is keen on providing a model of anti-harassment initiative for community service not only by law, but also through following values and principles inspired from religion and manners.

The seminar of Faculty of Arts revolved on asserting the responsibility of the university’s administration concerning protecting female students. This is represented in punishing the wrongdoer according to law, as well as the responsibility of the university professors in protecting students and raising their awareness about the harassment phenomenon and how it can be confronted. Prof. Dr.\ Moataz Abdullah, Dean of Faculty of Arts, has illustrated that the university has allocated a whole week for resisting harassment and violence, asking girls to immediately report any harassment case.

During the conclusion ceremony, Nassar has distributed certificates of merit among the honorees of the participants in Anti-Harassment Unit – Cairo University at 4:30 p.m., at Faculty of Commerce, Cairo University. He offered thanks and appreciation to every participant of staff members and students in the activity, expressing his great pleasure with this huge effort conducted by all the university’s faculties and institutes inside and outside the university campus. The ceremony has been organized with enthusiasm, insistence and determination to face all misbehavior in society.

Nassar has declared that Cairo University is the first university to offer an initiative in this form working on its implementation at the global level. He illustrated that the university will always boost all distinctive ideas and good activities for the sake of reaching a better society.

Prof. Dr.\ Maha Al-Said, Director of the Executive Committee, Anti-Harassment Unit, has expressed her appreciation of the university president for his continuous support for the unit. She has also thanked all the participant faculties in the ceremony.

She said that a supreme committee of Anti-Harassment Unit has been made as well as an executive committee that includes coordinators from all faculties of the university aiming at raising awareness and educating the unit’s principles and instructions, and its implementation.

The activity has been concluded by a theatrical show, entitled “After Night”, at 7 p.m., at Grand Celebration Hall. It was attended by the University President, Prof. Dr.\ Gamal Abdul-Nasser, Vice President of Cairo University for Community Service and Environment Development.