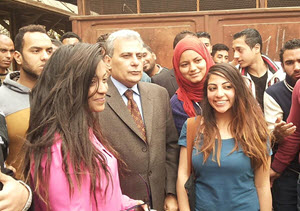 Professor Gaber Nassar, President of Cairo University, has made a surprise tour on Monday, March 23, 2015, for the facilities and buildings of the university campus. The tour included visiting a number of publishing houses, libraries and cafeterias, as well as some buildings which the university's workmen erase the offensive phrases written on. During his tour, Nassar met a number of students from different faculties. He listened to them concerning their conditions and study conditions, the complaints of some students, and the suggestions of the exams and teaching methods. Nassar welcomed the students' ideas and promised studying all their requests. Nassar met some staff members and took souvenir photos with students.

Cairo University President went to some cafeterias and bookstores. He asked the cafeterias' owners to provide the prices menus which should be affordable for students according to what is agreed upon with the university's administration. He confirmed that in case of any complaint regarding a certain cafeteria, necessary procedures will be followed for terminating its contract with the university administration.