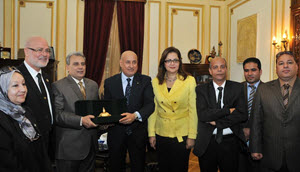 Prof. Dr.\ Gaber Nassar, President of Cairo University, has met Dr.\ Abdul-Aziz Al Tuwaijri, The Director General of the Islamic Educational, Scientific and Cultural Organization (ISESCO). The meeting handled cooperation relations between Cairo University and ISESCO in fields of mutual interests. Professor Nassar has illustrated that his meeting with Dr.\ Abdul-Aziz Al Tuwaijri has tackled means of cooperation between the university and ISESCO as well as means of its development in light of ISESCO’s current and coming work plan for cooperation with universities of Islamic countries in activities of science, culture, curricula and training. He pointed out the importance of increasing this cooperation through workshops in specific fields, activating ISESCO Chair activities at Cairo University which was founded in year 2008 for cooperation in different fields and academic activities. Nassar has commended the role of ISESCO in strengthening the bonds of cooperation between the countries which are members of the organization in different fields of education, science and culture.

The Secretary General of ISESCO has reviewed the efforts recently exerted by the organization in cooperation fields with universities in the countries of the Islamic world. He pointed out that the organization works on increasing cooperation with educational and cultural institutions in these countries as well as boosting their efforts in education, fighting extremism and spreading joint values between religions.

During the meeting, Professor Nassar has presented Al Tuwaijri the university’s shield expressing Cairo University’s appreciation to ISESCO and its mission. The meeting has been witnessed by Prof. Dr.\ Hala Al-Said, Dean of Faculty of Economics and Political Science, and numbers of professors as well.