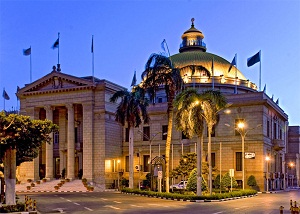 The competition is held in cooperation with Japanese Culture Center – Embassy of Japan in Egypt and Japan International Cooperation Agency (JICA), Cairo. The opening session is operated by Prof. Dr.\ Karam Khalil, Chair of The Japanese Department. It is witnessed by the ambassador of Japan, the former Japanese Minister of Environment who holds an office of Egyptian-Japanese Friendship Association, Tokyo.

Karam Khalil has illustrated that the arbitration committee includes members from Japan. They are Vice President of Tokyo University of Foreign Studies, The Executive President of Toyota Egypt Company for Automotive Engineering, The Director of The Japanese School in Cairo, Japanese Education Expert at The Japan Foundation Cairo Office, as well as one of the members of House of Representatives in The Japanese Parliament. Khalil has also confirmed that the secretary of the organizing committee of the competition includes elite of The Japanese Department professors.

Khalil has added that on the fringe of the competition, topics will be displayed for the competitors in Japanese as well as presenting Japanese songs by students of the department. In the conclusion, the competition results will be announced and awards will be submitted to the winning students.