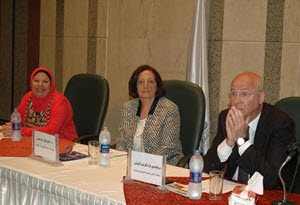 The celebration activities were inaugurated by Prof. Dr.\ Gamal Abdul-Nasser, Vice President of Cairo University for Community Service and Environment Development Affairs, as a representative of Cairo University President. He illustrated in his speech the importance of this celebration which embodies integration and solidarity between civilizations.

Italy's ambassador's representative has expressed his pleasure with his visit to Cairo University. He confirmed the deepness of Egyptian-Italian relations and the importance of the cultural cooperation continuity between the two countries, illustrating the importance of the celebration held at the courtyard of Cairo University, the mother of Middle-East Universities, and the cradle of science, creativity and literature.

Dr.\ Hamed Eid, Director of Science Heritage Center, has said in his speech that the celebration of The Egyptian-Italian Day for Scientific Heritage is a launch of creative cooperation in scientific heritage field between Cairo University in the East and scientific Heritage institutions in Italy. He illustrated that both Egyptian and Ancient Roman civilizations represent a vital part of history. He added that the celebration represents a major cultural launch that boosts a steadfast relation between Italy and Egypt in various fields and at all levels.