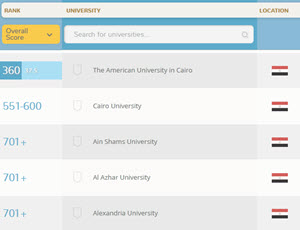 The English QS World University Ranking of year 2014/2015 has announced a list of the best 800 universities around the world, globally classifying Cairo University in the 552 rank.  The American University in Cairo is also listed in the ranking, as well as two governmental universities, namely; Ain Shams University and Alexandria University in the 702 and 705 ranks respectively. Noteworthy, QS is an annual ranking of the best 800 universities around the world via Quacquarelli Symonds Company which is an education competent. It is a non-profit organization founded in 1990 and headquartered in London. It has initiated its work as world university classifier since 2004 aiming at helping UK to measure the global position of its universities.

Through displaying topics, this classification refers to Cairo University's progress in Engineering sciences and technology occupying the 244 rank at the global level, the 298 rank in human sciences and arts, the 331 rank in social sciences and administration, whereas it occupies the 396 rank in science and medicine.

King Fahd University of Petroleum and Minerals (KFUPM), KSA, has topped up the ranking at the Arab level (225 globally), whereas Massachusetts Institute of Technology, USA, occupies the first rank in the global ranking.

QS Ranking depends on six standards. They are the academic reputation (40% of the total ranking), the ratio of students to staff members (20%), staff members' published researches, publication rates, and University researchers and academicians' researches cited by researchers around the world (20%), opinion polls of employing bodies, including organizations and companies, on performance and preparedness of University graduates (10%), the rate allowed by University to foreign students around the world (5%), and the rate of foreign staff members in University (5%). QS ranking is characterized by tackling education level evaluation offered by the ranked universities, quality of its basic and applied researches, specification of its graduates skills in basic and higher educational stages, as well as its international position.