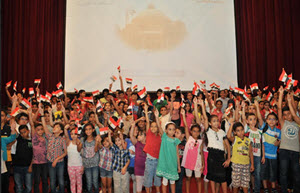 Prof. Dr. Gaber Nassar praised in his speech the idea of the program which aims at developing children talents and motivating them to work. Nassar illustrated that the idea of the program is the basis of establishing the future of Egypt which is in continuous need for discovering children talents and employing them correctly. He pointed out that the project opens up prospects of interests in the future of children in Egypt, and launching a creative nation of scientists, leaderships and pioneers.

Prof. Dr. Gamal Essmat, Vice President of Cairo University for Graduate Studies and Research Affairs, has confirmed that Cairo University is a pioneering university at the scientific research field since it has 20 faculties and 5 research institutes. He pointed out that the university gathers the largest number of staff members and students, and it usually has a position of prestige in the educational process, illustrating that it is the only university that keeps its international ranking throughout the previous five years.

Prof. Dr. Mamdouh Nassar, Vice Dean of Faculty of Science for Graduate Studies and Research and Coordinator of the Program, said that Cairo University is a Mother University that supports its sons for the sake of creating a generation which is able to compete and be involved in scientific research. He illustrated that this program is applied at different parts of the world for the interest of the educational process, motivating children to work, and developing children talents. He added that a scientific subject of the most prominent means of creation and innovation has been prepared to enable children to easily apply scientific theories.