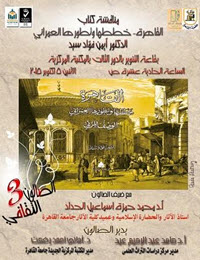 In cooperation with New Central Library, Science Heritage Center – Cairo University, is going to organize the third cultural salon in heritage field to discuss a book, entitled Cairo: Its Urban Plans and Development, by the author Dr. Ayman Fouad Saed, Head of The Egyptian Assembly for Historical Studies, and International Expert of Manuscripts. This is going to be on Monday, October 5, 2015, at 11 a.m., at El-Tanwir Hall, the third floor, New Central Library.

The salon is managed by Prof. Dr. Hamed Eid, The Manager of the Center. The seminar is lectured by Dr. Mohamed Hamza, Dean of Faculty of Archaeology, Cairo University, and Professor of Islamic Civilization. The salon is witnessed by elite of professors and specialists in the field of archeology and urban development.

Prof. Dr. Hamed Eid has illustrated that the salon discusses the book, entitled Cairo: Its Urban Plans and Development, which comes as a contemporary perspective of the concept of plans which started at Islamic Egypt since the third Hegira century, and reached its climax with the pioneering book, by Al-Maqrizi, entitled Preachments and Deem In the Mention of Plans and Monuments. : { The Mawaiz wa al-itibar fi dhikr al-khitat wa al-athar }.

Eid added that the book has been provided with more than 500 modern photos that illustrate the monumental landmarks of Cairo since Tulunid Age until the modern Age at mid-twenties, as well as a series of detailed maps that illustrate Islamic Cairo monuments.