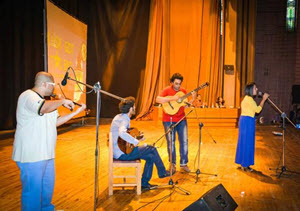 The first student competition is organized at Cairo University for discovering student talents in poetry, painting, singing, strumming, and theatrical acting. Talented students are selected by the filtration system through voting among arbitration committee in its ceremonies that are held in three phases or on the official website of the competition. The competition is called (Cairo Got Talent). It is organized by Forsan El-KasrTeam, Faculty of Medicine, Kasr Al Aini. The competition was only confined to the students of both Faculty of Medicine and Faculty of Oral and Dental Medicine throughout the last two years, and then it included all students of Cairo University in the current season. Forsan El-Kasr Team had announced its talent competition of the current season during the summer period. Five hundred and sixty three students from all Cairo University faculties have applied for entering the filtration. The best 45 were selected to enter the second phase or pre-finals to be filtered also to select 15 competitors so as to filter only 4 competitors for the finals. The arbitration committee includes art stars and academicians for arbitrating the competition.