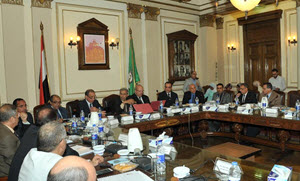 Prof. Dr. Gaber Nassar, Cairo University President, held a meeting at Ahmed Lotfy El-Sayed Hall – Cairo University for both councils of the Faculty of Arts and Faculty of Dar El-Ulum, in the presence of the university vice presidents. The meeting discussed the aspects of cooperation and communication between the two faculties as they are the richest components of the university in terms of the cognitive and cultural aspects. The meeting also tackled the activation of new frameworks of cooperation between the two faculties concerning interdisciplinary specialties, such as; the Arabic Language, Oriental Languages, Islamic Culture and Philosophy. The meeting also handled establishing the betweenness post-graduate studies for the two faculties to join, as well as exchanging professors in interdisciplinary specialties.