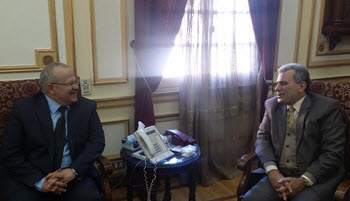 In their meeting on Sunday, January 17, 2016, Education and Students Affairs Council approved 14 projects for developing Education and Student Sector in the light of the strategic plan of the university. This was declared by Prof. Dr. Mohamed Osman El-Khosht, Cairo University Vice President for Education and Student Affairs. He pointed out that those projects included a project for applying governance, particularly transparency and exchanged control over all the administrations affiliated to the sector to ensure enhancing their performance and raising their efficiency. The projects also included Education and Student Sector Mechanization Project and a project for renewing the religious thinking, upon which the change of ideological referentiality and ways of thinking in religion are based. The religious thinking project is conducted by carrying out a series of workshops, competitions and student simulation at all faculties, besides a full program for discovering sportily, artistically and culturally talented students.

Cairo University Vice President for Education and Student Affairs pointed out that Prof. Dr. Gaber Nassar, Cairo University President, has already directed the importance of preparing a comprehensive plan for developing the sector and their central administrations. This should be based on achieving academic, administrative and financial reform according to a strategic plan for the university. El-Khosht explained that (14) projects of development have been presented to Education and Student Affairs Council who accredited them and started to carry out.