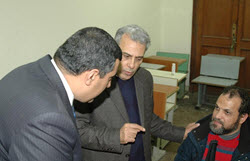 Prof. Dr. Gaber Nassar, Cairo University President, inspected the work progress of Open University exams, at Cairo University, ،،January round 2016,, . The exams started on January 30, 2016, at Cairo and partnership universities quarters at regions for the students of Faculties of Arts, Commerce, Mass Communication, Dar El-Ulum, Agriculture, Law and Kindergarten. Exams are being conducted in 21 programs under the full academic supervision of Open University faculties.

During his tour at exam halls of the educational building at the university campus, Nassar was accompanied by Prof. Dr. Mohamed Osman El-Khosht, Cairo University Vice-President for Education and Student Affairs, and Prof. Dr. Sayed Tag el-Din, the Director of Open Education Center – Cairo University. He was reassured of preparing exam halls and providing all the arrangements of exam work security.

Cairo University President talked with the students who were performing exam, and confirmed to them that the university is studying developing exam systems at the faculties. Open University exams are to be finished on February 15, 2016.