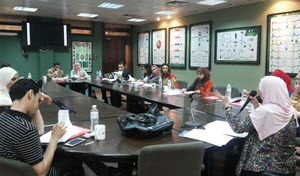 Anti-Harassment Unit, at Cairo University, held a training course on gender concepts and history of Egyptian Feminism Movement in universities, in cooperation with The Women and Memory Forum, on Monday, April 11, 2016, at Seminars Hall – Open Education Center.

The training course aimed at illustrating gender concepts, emphasizing role of women in general and respecting it, and linking this to harassment phenomenon which inferiority look for women and mainstream culture are the most important reasons for. The course also focused on recounting the history of Egyptian Feminism, its development, different tools, demands and acquisitions in the period from the late nineteenth Century until present.

Prof. Dr. Omaima Abu-Bakr and Prof. Dr. Hala Kamal, from The Women and Memory Forum, have lectured in the seminar. The seminar was attended by some coordinators of Anti-Harassment Unit at different University faculties. Executive Committee members at the training department have supervised carrying out the seminar.