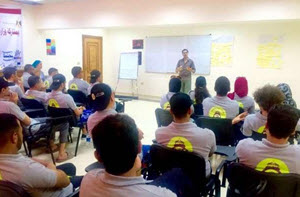 Anti-Harassment Unit – Cairo University held the first training camp for preparing student cadres to combat harassment in the period from April 27 to April 30, 2016. The camp is held by the unit in cooperation with the Ministry of Youth, The Egyptian Feminist Union, Basma Foundation for Social Development, HarassMap Foundation - Civil Society Organizations, at Alexandria.

The first camp is one of 10 camps held upon agreement in cooperation with Ministry of Youth, The Egyptian Feminist Union and Civil Society Organizations. Thirty nine students at unit team from faculties of law, commerce, arts, nursing, veterinary medicine, agriculture and dar el-ulum have participated in the camp.

The camp seeks preparing student cadres to combat harassment phenomenon inside the university. This is to be traced by rising awareness of harassment, its types, sexual harassment in special, means of social resistance of harassment, introducing harassment law, how to make a minutes, awareness-raising messages drafting and forming teams. The camp trainings included special sessions of concepts of gender, diversity, accepting others, raising the awareness of duties and rights of both sexes, and combating the negative image of woman.