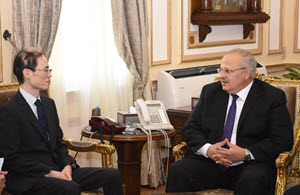 Cairo University received 3 Golf cars donated by a company to Disability Challengers Unit which is recently created by the University. Golf cars are for serving students, staff members and employees with special needs and giving them ride to the destination they want inside the university. The cars are going to be continuously available at the university campus. Receiving the cars was witnessed by Cairo University President Gaber Nassar, the chairman of the donor company Karim Abdullah and Cairo University Vice-President for Graduate Studies and Research Affairs Amr Adly. It was also witnessed by the General Coordinator of Disability Challengers Unit Haidy Nady and Cairo University Secretary-General.