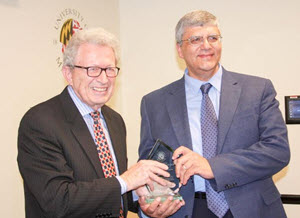 Cairo University Vice-President for Graduate Studies and Research received Distinguished Alumni Award at the United States from The University of Maryland, Electrical Engineering Department. The award is presented every year to three of the department graduates. The Vice-President received the award in a celebration held at the university headquarter at Maryland State. The celebration was attended by Maryland University President, the university professors and 3 graduates with different nationalities.

Prof. Dr. Amr Adly was appointed at Faculty of Engineering – Cairo University in 1994. He worked a counselor for many national industrial bodies. He developed the program of European Research, Development and Innovation with € 11 million budget for the Arab Republic of Egypt. He managed joint program with the Ministry of Scientific Research with EGP 100 million to increase the value added in national Egyptian industry.