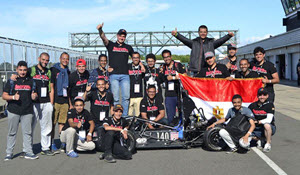 A team from Faculty of Engineering, Cairo University, participated in Formula Student Competition in 2016 at Silverstone City, Britain, from July 15 to July 19, 2016. It is a competition organized annually by Egyptian Society of Mechanical Engineers which is one of the most important global institutions specialized in mechanic engineering.

Cairo University President said that the competition is conducted among Faculty of Engineering students from different states of the world in designing, manufacturing and testing speed race cars. Cairo University team passed all technical and safety tests and got a permission of driving a car at a racetrack which is the first time for a team from an Egyptian University. The team won the 71st place among 159 global teams.

Faculty of Engineering Dean Sherif Murad said that the same student team is scheduled to travel to Germany to participate in a new competition within two weeks.