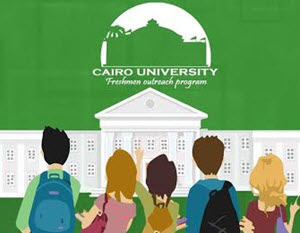 The Awareness Week Coordinator Rolla Samy pointed out that ،،the week activities start at 10 a.m., Sunday, September 18, 2016, by receiving new students at Cairo University Grand Celebration Hall in participation with previously enrolled students from various faculties. ,, Prof. Dr. Gaber Nassar will deliver welcome speech, followed by documentary films on Cairo University emergence history, a simple map of the university faculties, social and service units at the university and Cairo University notable graduates. Some of Cairo University graduates of artists, writers and poets will be honored. ،،The Lower Depths,, play by Faculty of Engineering theatrical team will be screened. Documentary films will be screened on the Central Library and some service centers and units of the university, such as Center for Foreign Languages and Translation, Community Service Center, Center for Skills Development and Entrepreneurship, Anti-Harassment Unit. Moreover, documentary films on Students Hospital, The University Hostel, The University Playgrounds and The University Theater will be screened. In addition, there will be artistic shows including،، sketches,, and،،The Fate,, Play by Faculty of Commerce theatrical team as well as acquaintance activities.

Student activities will be held at the university playgrounds at the university hostel including pentagon football between students and academic staff members, and artistic competitions in which previously enrolled students participate.