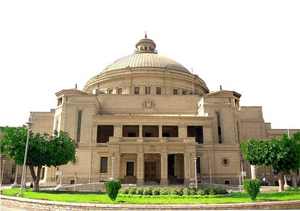 Cairo University President Gaber Nassar said that ،،the development special centers and units role at the university is important as they effectively present societal services to society. These services include providing applied research to solve societal problems relevant to the fields of economy, production, health, education, etc… The potential of the university special units and centers should also be improved to develop projects for community service and societal development. ,, Cairo University President pointed out that ،،the role of Cairo University is crucial for effective cooperation with the state in community development and offering services that contribute to solving some production, social and cultural problems. ,,

This was said by Cairo University President at the annual meeting of Cairo University Center for Foreign Languages and Professional Translation held under his presidency and attended by the university vice-presidents, the center director Dr. Amany Badawy and board members. The center performance throughout the period from July 2015 to September 2016 was reviewed during the meeting. The center work development plan of the coming stage was discussed. It includes the development of new educational and training programs for students, the increase of publication rate and humanities translations, youth skills development programs and societal communication.

The efforts exerted by the center were commended by Cairo University President regarding the development of foreign languages learning programs and new programs of students and individuals skills development. In addition, the University President praised launching cultural projects by publishing and translating humanities which enriches the cultural and academic field at Cairo University and the center role in communicating and cooperating with the state institutions.

Cairo University Vice-President for Community Service and Environmental Development Affairs Saeed Daw said that ،،boosting integration and cooperation opportunities between the university and society is necessary for utmost benefitting from the efforts of the center. ,, He pointed out that ،،the university special units and centers should abide by quality and governance standards regarding training, education and research and service projects. ,,

The Director of Cairo University Center for Foreign Languages and Specialized Translation Amany Badawy reviewed a report on the center work progress during the period from July 2015 to September 2016. She also reviewed how the center looks forward to become a bridge between civilizations and a beacon of educational services, effective training, information technology employment in training and teaching a broad category of society as well as undergraduate and post-graduate students.

Prof. Dr. Amany Badawy pointed out that ،،the center achieved a high growth rate over last months in developing educational services and training learners. It develops its curriculum to cope with Cambridge University model that focuses on enhancing listening, speaking and communication skills. ,, She pointed out that ،،the center laboratories were increased at the center headquarters at the university campus and Sheikh Zayed branch, and the number of learners increased in the period from July 2015 to July 2016 reaching 6, 600 learners with growth rate of 20% more than last year. ,,