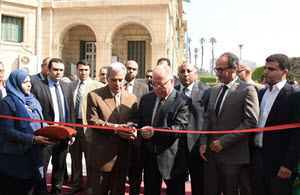 The Egyptian Minister of Culture Helmy Namnam and Cairo University President Gaber Nassar opened a book fair at Cairo University campus. The book fair is organized by Cairo University in cooperation with The Ministry of Culture. It contains more than 1, 500 books including scientific, ideological, cultural and cognitive books issued by General Egyptian Book Organization and The Egyptian National Library and Archives with discounts for academic staff members and students until 30% of cost.

The Minister and Cairo University President inspected varied volumes inside the fair which is scheduled to continue for two weeks. Namnam and Nassar also inspected the constant fair of The Ministry of Culture, entitled ،،Read,, , encompassing a large group of volumes issued by the ministry.