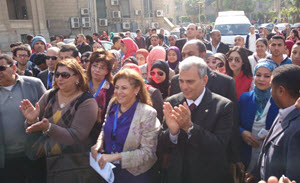 Prof. Dr. Gaber Nassar added that ،،punishment for this phenomenon is going to be strict. ,, He said that ،،Anti-Harassment Unit, at Cairo University, enlisted the University in the list of International Organizations for the Elimination of Violence against Women. ,, He pointed out that ،،activities will continue until December 10. ,,

The Director of Anti-Harassment Unit at Cairo University Maha El-Saeed said ،،the unit chose a message that is aimed at the university youth by spreading knowledge onequality, enhancing protection of women against violence and raising awareness of an academic education secure for all among them by a group of activities that students, academic staff members and employees participate in within the sixteen-day campaign which encounters violence against women. ,,

The UN allocated International Day for the Elimination of Violence against Women for raising the public awareness and gathering people for making change concerning the issues of combating violence and harassment with all its forms.