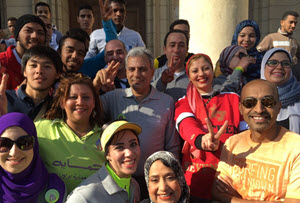 The marathon was launched from the university dome yard passing by Al-Gamaa, Al-Sudan and Tharwat streets until reaching the starting point. Nassar participated in warming-up and eating breakfast with students before launching the marathon. Cairo University participated in many activities, cultural, artistic, sport and social activities in the framework of the sixteen-day campaign for combating violence against women. The sixteen-day campaign activities are aimed at raising general awareness towards anti-harassment and achieving this goal amid the university community under the guise of Safe University for All. These activities cooperate with society, media and the institutions concerned with the issues of equality and countering violence against women.