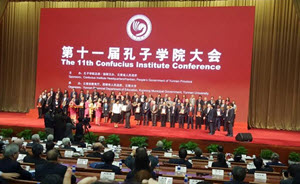 Confucius Institute, at Cairo University, is awarded as the best Confucius Institute around the world. The Director of Confucius Institute at the University Rehab Mahmoud received the award during the eleventh international conference of Confucius institutes around the world held at Kunming, at South Eastern China, in December, 2016. Prof. Dr. Rehab Mahmoud received the award from Vice Premier of the People Republic of China Liu Yandong amid the attendance of 2, 200 officials and representatives from 140 states and regions in the annual incident known as ،،Davos Education Sector,,.

Prof. Dr. Mohamed Osman El-Khosht said that ،،the eleventh conference tackled developing Chinese teaching in the world, extending Confucius institutes, developing Chinese language education and training methods.,, He pointed out that ،،the Chinese government supports Confucius institutes at the world level in terms of education and technology to enhance cultural and educational openness between the institutes and the world.,,

Cairo University established Confucius institute by an agreement between Cairo University and Beijing in 2007 and National Office of Teaching Chinese as Foreign Language, and the institute became a bridge of cultural cooperation between Egypt and China.