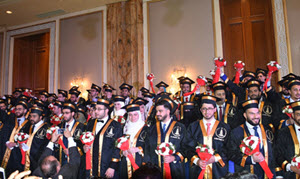 Cairo University President Gaber Nassar witnesses the celebration of expatriate students from different countries, except Malaysia Program students, for their graduation from Kasr Al-Ainy Medical School, January, 2017, class. Their number reached 171 expatriates most of whom are from Arab countries.

Nassar said that ،،Kasr Al-Ainy Medical School is the beacon of medical education in Egypt and the Middle East. It is the first Arab medical school that was established in 1827. It encompasses many distinctive professors at the international level.,, He pointed out that ،، the faculty and its professors continually exert efforts to develop the study at Kasr-Al-Ainy Medical School which rank reached 223 at the world level.,,