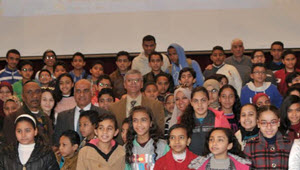 The inauguration is attended by Cairo University Vice-President for Postgraduate Studies and Research Affairs Amr Adly, the Child University program coordinator at ASRT Gina El-Fikky on the behalf of the academy president, Faculty of Science Vice-Dean for Postgraduate studies and Research Affairs and the General Coordinator for Child University Program at Cairo University Mamdouh Nassar as well as elite of professors and specialists of scientific, technical, and skill-oriented programs preparation.

Cairo University Vice-President for Postgraduate and Research Affairs Amr Adly pointed out, in his speech, that ،،Cairo University is the university of all Egyptians. It is a great academic edifice that was emerged thanks for the donations of Egyptians for development and civilization,,. He pointed out that ،،the university is honored to be a partner to Academy of Scientific Research and Technology in this program which is crucial for the country need for creativity and thought. It is a patriotic duty to provide creative children with all means of releasing their creative energy to lead them to the highest positions of success,,.

The Coordinator of Child University Program at ASRT Gina El-Fikky said that ،،the program is aimed at supplementing what children receive at schools with knowledge and creative skills development by analysis, knowledge and getting children introduced to university.,, She pointed out that ،،the programs of each stage were designed by university professors, are suitable to the ages of children and can easily be grasped by them.,,