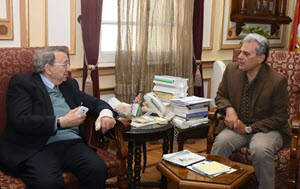 Prof. Dr. Gaber Nassar said that ،،coordination and communication are current between Cairo University and National Research Center regarding these experiments.,, Nassar commended the Egyptian scientist Mostafa El-Sayed and his scientific achievements that were met by international favorable response. Nassar expressed his appreciation of the Egyptian scientist for communicating with Cairo University and boosting its research progress.

Prof. Dr. Mostafa El-Sayed said that ،،a scientific committee was formed of specialist professors of oncology to continuously consult the research results reached and the correspondence of experiments to international criteria and specialized international scientific committees. The research results will be presented to the Ministry of Health to start treating cancer by gold molecules on humans. This is aimed at giving research in Egypt the priority in cancer treatment.,,