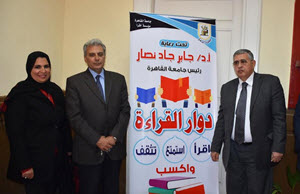 Cairo University President Gaber Nassar inaugurated ،،The House of Reading,, project at the Heritage Central Library launching it officially. Nassar said that ،،the project is aimed at reviving Cairo University ancient traditions in the first half of the twentieth century when the cultural and reading activities were being organized frequently as well as the university educational and enlightening role without separating between scientific specialties.,, The project is aimed at providing nearly 5000 books in the first stage including senior writers, men of letters and innovators in Egypt and the Arab World for students, researchers, academic staff members and employees. Reaching 125, 000 books for The House of Reading is aimed to cover all the fields of humanities, the creations of senior writers, men of letters and thinkers.

The project is mainly aimed by Cairo University at motivating students to read and helping them form personal libraries to themselves by boosting this project. Cairo University tries to push book market forward by purchasing a large number of book titles from different Egyptian and Arab publishing houses. The university believes that there is no other way to uplifting homeland except by spreading culture and restoring the enlightening role of the university.

،،The House of Reading,, is one of the activities of ،،Iqraa,, institution which is established this year by Cairo University. Cairo University President Gaber Nassar is Iqraa Chair of Board of Trustees. The board of trustees includes scientific and cultural figures as members including Dr. Gaber Asfour, Dr. Hossam Badrawy, the President of Egyptian Writer Union Mohamed Salmawy, former president of Cairo University Dr. Abdullah El-Tatawy, as well as a Lecturer of Faculty of Arts and Iqraa institution trustee Dr. Ahmed Ammar who supervises The House of Reading, and others.