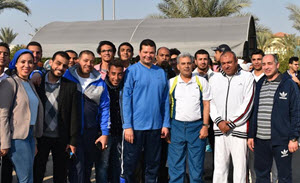 Nassar pointed out that ،،Cairo University started carrying out the project in September, 2016, after allocating the land, extracting licenses, and providing the land with facilities. It is scheduled that the establishments are finished and the residential apartments are handed over to participating members within four years,,

Cairo University President participated, with students, in the sports day held by Community Service and Environment Development Sector at Sheikh Zayed Branch. The sports day includes running and fitness competitions and bicycles marathon which the professors, students and employees of the branch participated in.