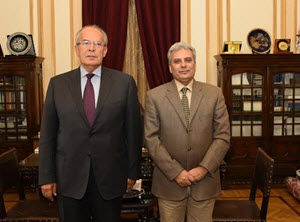 The Ministry of Local Development and Cairo University President agree on signing a cooperation protocol in the coming week. The protocol includes plan implementation mechanisms and objective programs that are to be agreed on. The joint protocol is sponsored by the Minister of Higher Education and Scientific Research Khaled Abdel-Ghaffar.

The Minister of Local Development commend the role played by Cairo University in community service and cooperation with the state institutions. He pointed out that ،،there are many files are to be studied by Cairo University concerning some issues that governorates citizens are concerned with since these files are mainly associated with the developmental plan of the ministry.,,

Cairo University President Gaber Nassar said that ،،Cairo University serves society and it is ready to cooperate with the Ministry of Local Development by its professors, researchers and scientific centers to participate in carrying out local development plan projects in Egyptian governorates that the ministry seeks.,,