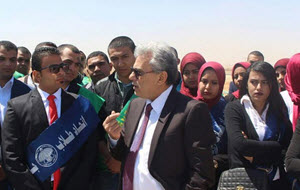 Cairo University students showed their admiration of the project which is aimed at a real leap in Egypt. They also acclaimed the tasks carried out by Armed Forces Engineering Authority in cooperation with Egyptian national companies after they listened to the ample explanation provided by those who are responsible for the project.