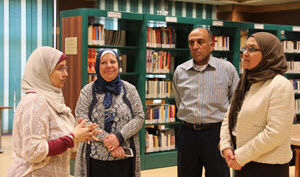 The Director of Cairo University Center for Foreign Languages and Professional Translation said that ،،the outlet inaugurated at Cairo University Central Library is prepared for exhibiting and selling cultural volumes of different projects particularly books translated from foreign languages to Arabic. This is aimed at encouraging reading and making those books available for the university students, academic staff members and researchers frequenting the Central Library.,,

Prof. Dr. Amany Badawy added that ،،the center participated, during the last period, in some international book fairs most prominent of which are Sharjah Book Fair and Cairo International Book Fair.,, She pointed out that ،،the center is seeking extending its role in spreading knowledge and culture and developing new programs in translation and Arabicization, marketing its different volumes as well as developing the center learners skills in the art of translation.,,

Cairo University Gaber Nassar reviewed, during his meeting with The Director of Cairo University Center for Foreign Languages and Professional Translation Amany Badawy, a report on Cairo University Translation Project achievements conducted through the center. The report refers to the translation of 52 titles from different foreign languages to Arabic by the center. Those writings varied from psychology to literature, religions and politics. Cairo University President also reviewed the regular volumes of the center including arbitration academic journals in humanities, most prominent of which are Hermes and Pioneers Series, to become a practical communication channel among those who are interested in this field.

Cairo University President Gaber Nassar urged boosting Center for Foreign Languages and Professional Translation by Cairo University to continue its cultural role and develop its projects to be a bridge for cognitive communication between the university and society.