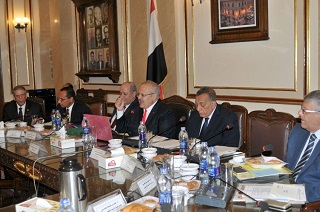 Cairo University Council reviews in its meeting, headed by Cairo University President Gaber Nassar, the progress of second term exams that started by mid-May, 2017, at faculties. The council stresses, in its meeting, solving any problem that may arise during exams and the existence of professors in time of their subject exams. Exam correction and controls should begin immediately after the exam of each subject. Students answer sheets should quickly be exchanged among professors, corrected, and revised. Students marks accuracy should be ensured. Results should be announced consecutively after exams until the first week of July.

Cairo University Vice-President for Education and Students Affairs Mohamed Osman Al-Khosht pointed out that ،،Second term exams at Cairo University faculties progress according to a disciplined system. Exam control room has not receive complaints regarding exams until now.,, Al-Khosht said that ،،No excesses, that may influence exams, took place.,, He added ،،Cheating cases among students that were monitored until now are very few. Cheating cases are dealt with according to the rules approved by Cairo University Council.,, Al-Khosht said that ،،All exams are finished at 3:30 p.m. during Ramadan well in advance of Iftar.,,  He pointed out that ،،all means of comfort are allowed to students to perform their exams. Any complaint concerning exam is treated in time.,,

Cairo University President Gaber Nassar said that ،،the book allocated a page or two for each university among the 500 globally ranked universities. Cairo University has two pages in the book that handle its history that extends to more than 100 years, its progress in education development, contribution to scientific research and local community service. It is the only Egyptian university that comes among the best 500 universities all over the world. Cairo University kept its position in the ranking until it occupied a distinctive ranking, as the book mentioned, in the last two years.,,