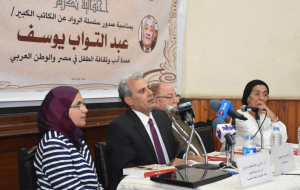 Cairo University President Gaber Nassar said that ،،The late man of letters Abdel-Tawab Youssef, the Dean of Children Literature, is a unique mentality that disseminates love and peace in human hearts.,, Nassar pointed out that ،،The values that the great writer calls for saving Egyptian society from the loss it goes through nowadays.,,

Center for Foreign Languages and Professional Translation, at Cairo University, celebrates honoring the late writer Abdel-Tawab Youssef, the Dean of Children Literature, in Egypt and Arab World on July 15, 2017, at Faculty of Arts, Cairo University. The great writer is honored on occasion of issuing a memorial book on his biography among the works of Al-Rowad Series issued by Center for Languages and Translation to honor pioneers and researchers in different fields of science and knowledge. The celebration is attended by the Minister of Culture Helmy Al-Namnam and elite of men of letters, culture, and media, professors of Faculty of Arts and the family of the late writer.

Nassar added that ،،Abdel-Tawab Youusef sows seeds of manners and good traits in children minds.,, Nassar pointed out that ،،The books of the great writers are pearls sprinkled in the space of Arab Literature.,, Nassar said ،،We are in need for restoring the values that the great writer enunciates in his books and integrate them in our lives because they call for love, do not discriminate between religions, and never direct children to violence or fanaticism.,,

The Journalist Helmy Al-Namnam, the Egyptian Minister of Culture, said in his speech at the celebration that ،،He was working in the beginning of his career at Dar Al Hilal Publishing House and was allowed to meet the great man of letters Abdel-Tawab Youssef who advised him sincerely describing him as a human who have a tolerant and compassionate heart.,,

Al-Namnam added that ،،The writer Abdel-Tawab Youssef lived the whole of his life with a heart of a child, but not with a mind of a child. His character enjoys a childish innocence.,,

The Minister of Culture gives his thanks to Cairo University and its leaderships for their celebration of the great man of letters and recording his biography in a memorial book.

The Director of Center for Foreign Languages and Professional Translation, at Cairo University, Amany Badawy said that ،،The late writer Abdel-Tawab Youssef had the ability of creating different types of literature, but he preferred to continue writing in children literature.,,

Prof. Dr. Amany Badawy added, in her speech at the celebration of honoring the Dean of Children Literature in Egypt and Arab World, that ،،Abdel-Tawab Youssef is a figure who loved adults and youngsters.,, She pointed out that ،،He got Polonia International Fair for Children Award in 2000 for his book The Life of Muhammad in Twenty Stories.,,

Prof. Dr. Amany Badawy refers to Al-Rowad Series that Center for Foreign Languages and Professional Translation is responsible for. Al-Rowad Series is one of the cultural projects of Center for Foreign Languages and Professional Translation. The series is aimed at honoring elder researchers, scholars and pioneers in different cognitive fields. She illustrates that the series presented, since its issuance, memorial books for many pioneers like Mohamed Enani, Hamdy Ibrahim, Awatef Abdel-Rahman, and Nasr Mobasher Al-Terazi.

Faculty of Arts Vice-Dean for Postgraduate Studies and Research Loubna Abdel-Tawab Youssef said that ،،Her father Abdel-Tawab Youssef authored 1015 books translated to different languages. He authored 40 books for adults and two books on The Life of Muhammad in Twenty Stories printed to 7 million copies. His most prominent writings are Scheherazade Tales, Dialogue or Quarrel, The Cultured Cat, The Courageous Safety and Very Non-popular Tales.,,