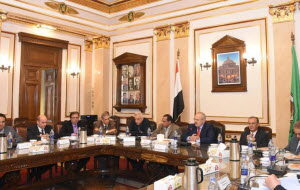 Cairo University President said that ،،There is no increase in study fees of bachelor stage in the coming academic year and the university hostel fees as well.,, Elkhosht explained ،،Free education is a fundamental right provided by law.,,

Cairo University Deans Council urges in its meeting providing students with study materials whether by print or electronic academic books by the beginning of the academic year. It also urges starting from now the preparation of study schedules, finishing the maintenance of lectures halls and laboratories, and preparing libraries at faculties well before the coming academic year.

Cairo University Deans Council decides forming a committee of Urban Planning, Engineering and Archaeology faculties professors to allow cafeterias at faculties. The committee is aimed at planning for cafeterias places at campus without affecting the overall shape of the campus and green areas and optimizing Student Services Building as well.