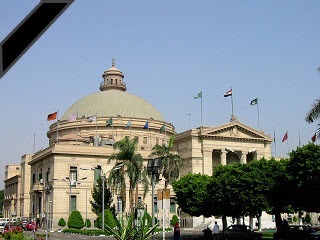 Cairo University, headed by Prof. Dr. Mohamed Osman Elkhosht, condemns the terrorist attack that took place at Al-Bahariya Oasis at Giza, on Friday. A number of police officers and soldiers are martyred. They exerted their souls for the sake of homeland and people protection.

Cairo University states that ،،This criminal act will not discourage faithful and brave Egyptian policemen of combating terrorism and eradicating it from its roots.,,

Cairo University including its president, vice-deans, professors, students and employees offer their condolences to Egyptian people for courageous policemen who sacrificed their blood for the stability of homeland. May Allah bestow His Mercy on them and inspire their relatives of patience and solace.

Cairo University President Mohamed Osman Elkhosht said that ،،Such abject act of terrorism will not depress Egyptian people who are determined to face black terrorism and stand shoulder-to-shoulder with men of army and police to eradicate terrorism from its roots led by Egyptian President Abdel-Fattah El Sisi.,,

May Allah protect Egypt, its army, police, and people.