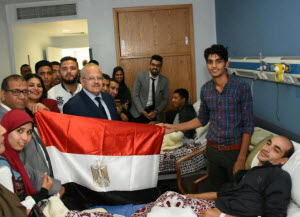 Cairo University President expresses his gratitude to police heroes for their sacrifice for the sake of homeland to maintain safety and stability. Elkhosht presented some gifts to the injured wishing them speedy recovery.

Elkhosht said, during visit, that ،،This abject act of terrorism will not discourage loyal Egyptian sons of courageous police men of combating terrorism and eradicating it from its roots.,, He enunciates that ،،Egyptian people stands shoulder-to-shoulder with Egyptian state in terminating terrorism and preserving stability and safety of homeland.