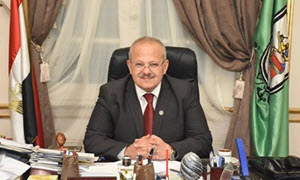 Cairo University President Mohamed Othman Elkhosht delivers a lecture at Command and Staff College entitled ،،How Terrorist Thinks,, and attended by police officers from 37 Arab and foreign states. Elkhosht illustrates the traits and stages of terrorist thought. He divides the terrorist personality into five patterns showing cognitive mistakes made by terrorist.

Cairo University President tackles, during the lecture, the kinds of terrorism and means of resistance. He divides mentalities into two kinds; rigid mentality and developing mentality.

Elkhosht assures that it is necessary to know the characteristics of terrorist personality and this way of thinking. He pointed out that not knowing the terrorist way of thinking leads to failure in facing terrorists. He said that this failure continues for decades, but Egypt manages to confront terrorism this period at many levels most prominent of which are making a separate demarcation line between terrorist state and strong patriotic state that represents the continuity of ancient Egyptian state vis-à-vis proclaimed Islamic state.