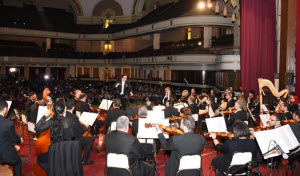 Cairo University hosts Cairo Symphonic Orchestra at Grand Celebration Hall on Tuesday, March 13, 2018, within the cultural and artistic season of Cairo University, in cooperation with Ministry of Culture and Cairo Opera House.