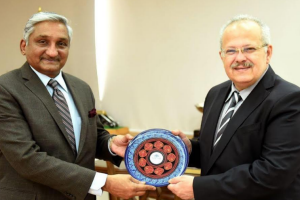 Cairo University President Mohamed Othman Elkhosht participates in the meeting of The Board of Trustees of Pakistan International Islamic University chaired by Pakistani President Mamnoun Hussein at the presidential palace of Islamabad.

The agenda including performance reports of International Islamic University is discussed during the meeting, and future vision for developing the university to become one of the pillars of combating terrorism is discussed. Adding new members of Cairo University scholars to General Trustees Senate is suggested. University professors are asked for teaching in different disciplines being pioneers in scientific research, enlightened human thought, and combating extremism. Cairo University President is a prominent member in the Board of Trustees of Pakistan International Islamic University.

Prof. Dr. Mohamed Othman Elkhosht holds a meeting with National University of Sciences and Technology (NUST), a civil military university and one of the greatest Pakistani Universities. NUST occupies advanced places in world universities ranking. Means of joint cooperation in many fields including research projects in manufacturing and student exchange for a semester or more according to European system and Bologna agreement are discussed in the meeting.