Elkhosht: ،I Dream of Providing Alternatives of Raw Materials of Imported Medicines and Support Free Education, 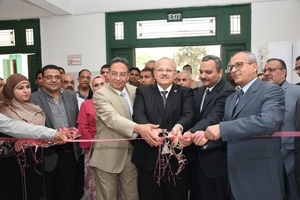 Cairo University President Mohamed Othman Elkhosht announces during the meeting of Faculty of Pharmacy council held at the faculty on Monday, May 14, 2018, presenting financial support of EGP 10, 000, 000 to Faculty of Pharmacy which exceeds the rank number 100 in world universities ranking.

Elkhosht said that Faculty of Pharmacy is one of two disciplines in the university included in QS ranking for academic programs in the category from 101 – 150, besides the architectural engineering discipline. He pointed out that ،،I know well that the faculty is doing its best to develop itself without waiting for coping with the age updates. We support all who contribute to developing Cairo University and advancing its global ranking.,,

Elkhosht said that Cairo University accomplishes some achievements throughout the previous 9 months; including a committee for university facilities to examine the southern and middle buildings of National Cancer Institute (NCI) at Cairo University. The committee deduces the validity of the southern building which will be completed and developed with the most modern international specifications with value of EGP 298, 000, 000, which increases the accommodating energy of NCI with rate 30%.

Cairo University President pointed out that the project of Kasr Ainy Hospitals development which value amounts to SR 750, 000, 000, including Saudi loan of SR 450, 000, 000 value which Egyptian government pays by the beginning of 2021 and bears the rest of the project cost. The global advertisement of the project has been done.  More than 30 global companies applied for designing and supervising the project and one will be chosen for running the project.

Elkhosht proceeds that the cornerstone of Cairo University International branch is set after finishing all the engineering and architectural drawings and the academic conceptualization of the branch. The first stage will be finished within two years.