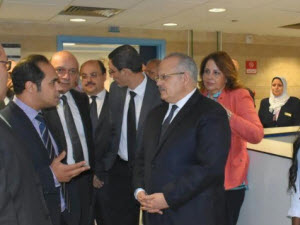 Prof. Dr. Mohamed Othman Elkhosht said that Burns Unit is a crucial leap in Egyptian hospitals that applies the most modern treatment methods and uses the most modern devices. He added that the Chest Unit and Heart Unit at the Emergency Hospital represent development in telescopes and catheterization especially that the two units are at one place for the first time and relies on each other in many cases.

Elkhosht acclaims treatment services presented by Kasr Ainy Emergency Hospital 185 assuring that they are a great addition to Kasr Ainy Hospitals which will remain the greatest medical edifice in Egypt and the Middle East presenting treatment service for free.