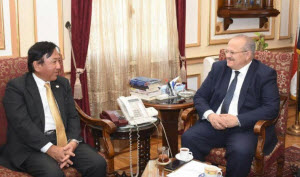 Cairo University President discusses with Japanese Ambassador a number of ideas related to expanding horizons of cooperation between Cairo University and Japanese Universities in different academic, research and cultural fields. The discussion is proceeded in the light of the fact that Egypt and Japan are looking forward to supporting and developing relations between the two countries in different fields including academic, research, and training cooperation and student exchange.