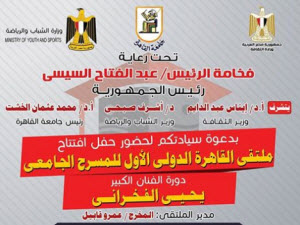 International Festival for University Theater is convened on Monday, October1, 2018, in cooperation between Ministry of Culture, Ministry of Youth, Cairo University and Egyptian Artist Association under the auspices of Egyptian President Abdel-Fattah Elsisi. The inauguration is held at 7 p.m. at Grand Celebration Hall at Cairo University.