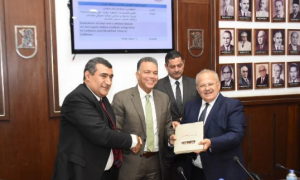 Cairo University President said that Cairo University faculties and institutes should work in the light of comprehensive national security theory. He pointed out that ،،Useful Science is the one which is utilized by people and scientific research is directly related to economy service and national projects service.,,

Elkhosht attends a celebration arranged by Faculty of Engineering Cairo University to honor Ministry of Transportation engineers who succeeded in the requirements of Masters of Engineering in Transportation Safety. The celebration is attended by Minister of Transportation Hisham Arafat and Ministry of Transportation leaderships. First-generation university was interested in education, second-generation university was interested in education and scientific research, whereas third-generation University works on employing knowledge in society service. Elkhosht pointed out that Cairo University is working on transferring into third-generation model that is related to society service and participating in development. He added that Cairo University owns a number of excellence points that qualify it to competition with the greatest universities at local, regional, and international levels. Scientific research is in the lead of these points which we are adapting to serve economy and national projects.