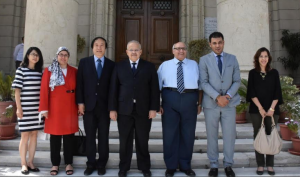 Cairo University President Mohamed Othman Elkhosht greets Vice-President of Renmin University of China which is the top-ranked university in China that is concerned with the Belt and Road project in which Egypt participate as well. Cairo University President said that the university is concerned with opening all means of communication and developing avenues of cooperation with the outside world. Elkhsoht added that he realizes the importance of China as a political and economic super-power in relation to Egypt. He pointed out that the Road and Belt project is a great project not only for China, but it is a global project that helps communication between world states regarding both economic aspect and intercultural encounter. Elkhsoht said that the Chinese state is admired by him because it presents a model of economic state whose people are one with nature and world. He welcomes cooperation with Ain Shams University and Renmin University of China in the Road and Belt project.