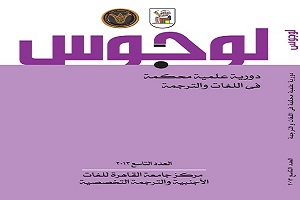 Center for foreign Languages and Professional Translation – Cairo University has issued a new version of Logos periodical for 2013. It is a scientific arbitrated periodical that publishes researches and academic studies in Arabic and English in fields of civilization and linguistic studies. This is included in the context of project of scientific and cultural journals and Periodicals.

This is sponsored by Dr. Gaber Nassar, President of Cairo University, and is supervised by Dr. Mohamed Othman Al-Khosht, Director of the center. The project includes, in addition to Logos periodical, Hermes and Al-Torgoman journals. The project aims at increasing research contribution of Cairo University in fields of social and human sciences, encouraging intellectual and cultural creativity of staff members and specialized researchers and following-up the global trends in field of intellectual and cognitive creativity.