Vice President of Cairo University: Students Should Respect Rules of Stay and Residence in University Hostels 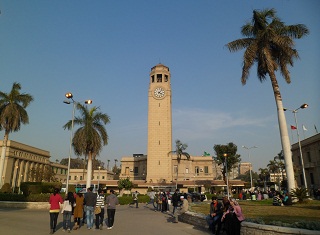 Prof. Dr.\ Ezz-el-Din Abu-Steit, Vice President of Cairo University, has confirmed that he will not allow any student to remain and stay at the university hostel in case of not abiding by rules of stay and residence, or outrunning the framework of peaceful protest and freedom of expression or practicing acts of violence and vandalism.

He added that the university has exploited extending mid-year vacation in conducting maintenance and purging its facilities such as restaurants, halls and buildings. He pointed out that maintenance is a continuous process as a result of student density and rates of depreciation. Dr.\ Abu-Steit demanded from student respecting rules of placement and accommodation in university hostels and maintaining facilities.

Dr.\ Abu-Steit has said that contract has been signed with one of the national companies to supply some of the needs of the university hostels of food. Campaign of Health awareness for combating seasonal influenza, in coordination with Health Directorate at Giza, passes on the university hostels providing it with medicines to heal the cases which seem to be infected. University Administration decided to accredit two million EGP from Social Solidarity Fund to boost Students Hospital to provide it with medical supplies and medicine.